Great Somerford in Wiltshire is quintessentially English where the words ‘rush hour’ have no meaning. In this clay vale the sweet grass and banks of wild flowers keep the dairy herds happy and life for them and the village’s residents is at a pace they choose to set. Nestled here too is an aquatic gem made up of 3 mature gravel pits that have been sculpted into a wildlife haven by the Porter family; everything from a dragonfly to a kingfisher has found a home, making it a very special place indeed. Protected from prying eyes and disturbance it’s a magnet for nature that enjoys the peace and serenity afforded which makes it a wonderful environment to fish in for the few lucky anglers who are fortunate to wet a line here. 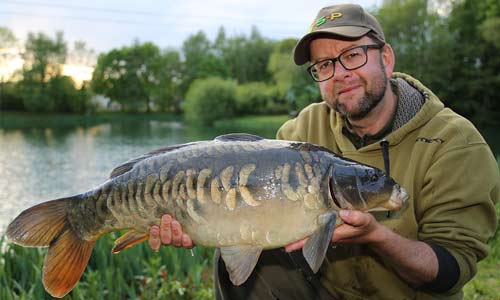 Angling is currently allowed on the gravel pit known as Broadfield via a syndicate, which is run on an invitation only basis. This is to ensure every member enjoys the very best of what Great Somerford has to offer with like-minded anglers. Originally run as a trout fishery this 5 acre pit saw a change in direction under the stewardship of Fishery Manager and syndicate leader Russell Wilmott in 2017.

Stocked with a carefully selected batch of carp which have thrived in this gem of a water 20s are now regularly caught. To reach such proportions in a relatively short space of time shows that the potential is phenomenal in this rich, clear aquatic habitat and the carp are safe as the pit was otter fenced, meaning there is a bright future for them and the anglers who fish here. Situated behind a locked gate it isn’t only the fish that can relax because Broadfield offers the anglers a safe and secure venue to spend their time in. Little wonder then that a place on the syndicate is in high demand and with a population of approximately 150 fast growing carp it is expected to remain that way.

If you feel you match Broadfield’s ethos, respectful of other anglers and the natural environment then we’d be pleased to hear from you. Register an interest below and if a place becomes available you might be contacted to supply further details. Don’t think that this opportunity is only for anglers with a CV full of huge carp because as long as you practice a high level of fish care being a good fit for the membership already present is far more important. We look forward to hearing from you and hopefully our carp will be happy to meet you too in the future.