With the first shoots of spring upon us and day winning over night, water temperatures had begun to rise and the pike had taken note.  For them it was vital to give their young a head start over what will be their prey – silver fish – hence the urge now to spawn. The first part of this ritual are the jacks gathering in the shallows, testosterone charged in anticipation for the hen to arrive and it’s during her journey from the depths that the lure of a final meal can often present the angler with a last chance to tussle with old esox

The dawn chorus had yet to welcome in a new day when companion Tim Norman and I opened the rusty wrought iron gate and we headed down the steep incline to the old boathouse.  By now our eyes had adjusted to the darkness and perched on the wooden bench outside the structure we supped coffee and watched roach pimple on the surface.  All appeared serene until the water shook with the after shock of an attack from within the shoal.  A back big enough to put a saddle on had torn through the upper layer displaying nothing but a silhouette to us, though its presence wasn’t lost on each others mindset.  Our consumption of the hot drink rapidly increased, both keen to make the monster we had witnessed taste metal. Rapidly we divided the water in half covering the scene of the crime with a two-pronged attack on either side o f the bay.

Night had now begun the transition to day although dawn was lost to us today given the lake’s step sided, wooded escarpments which shielded the water.  Instead while we both erected the tackle a mist filled the valley forcing a barrier between the lake and sky.  This new element refused to remain contained, swirling and shape changing continuously.  We had, it seemed, the perfect piker’s dawn and all that was left to complete the vista was the disturbance caused by the arrival of our baits. 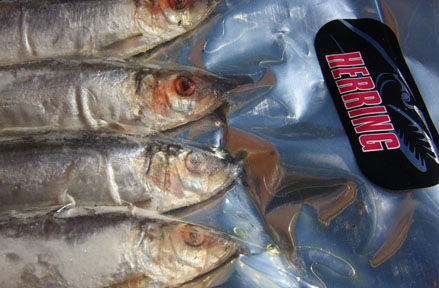 I had opted for a straightforward float fished dead bait utilising smelts and herrings, gently positioned over the blanked weed with a couple of swan shot.  Tim, on the other hand, had thought about the situation a little more with attention given to the weed’s ability to mask the bait.  By fishing a paternoster with a long lead link his herrings would hang head first over the vegetation.  At a glance this would appear an unnatural presentation, although I have witnessed silver fish behaving in this manner while in the centre of a shoal and for want of a better word sleep seems to be occurring so maybe there was a method to Tim’s madness.   Three rods each dispatched their cargo out into the target area with every arrival sending small fish scattering across the surface, it was obvious that the lake’s larder was here and as another pike tore through the shoal so was our quarry.

For such a fearsome creature the bite, when it comes, can be a subtle affair and so it proved when my Drennan Zeppler ‘bobbed’ once and then simply sat an inch lower in the water.  I was certain that the bait had been engulfed and without wanting to risk deep hooking I struck although with hindsight this would prove to be my undoing.  As the rod was swept back so the braid rose rapidly off the surface and a brief connection was made which resulted in a powerful and unstoppable charge.   Initially this seemed to bode well until inexplicably all tension was lost and I was left to wind in and lick my wounds, which was at least soothed by the knowledge that I had avoided any harm to my opponent.  Glancing across at Tim to explain the situation alerted me to the fact that he too had made contact, although it seemed in his case that he was winning. 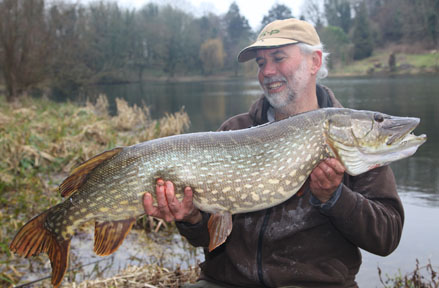 Focussed on the mission Tim sought to tame the beast and I watched as his rod cut an arc through the mist that surrounded him.  Close to the margin a tail thrashed throwing up white water and the amount of displacement gave a good indication that this wasn’t a fish you would want to lose.  Then a net came into play appearing to be searching as Tim’s arm became outstretched while the rod took on even more strain.  A purposeful scoop came next followed by a lifting of the mesh and a smiling face.  For a moment my friend enjoyed his victory then with a straining bow frame his prize was lifted ashore for further examinations.  The words 25lbs said it all although before I had time to offer my congratulations I, too, was called back into action. This time I hoped not to suffer another loss but could only pray that the trebles had found a good foothold as the battle begun. The pike of course felt he complete opposite and hoped to break our bond with a series of savage surges up the lake accompanied by flared gills and a swishing tail.  On each run the clutch served to temper this anger until finally its energy was spent and it was my turn to smile.  Twenty-one pounds was my call back across the water to Tim and we congratulated each other on a good morning’s work.  For one of us however there was so much more to come.

Twice in the next hour I watched as Tim was once more engaged with the lake’s inhabitants, proving his paternoster herring was tactically superior to my approach. Both battles strained his tackle and tested his experience, but fortunately didn’t break his resolve.  Each victory was confirmed to me by a number being called out, with 24lbs and 21lbs more than enough to know that Tim had completed a morning to remember. 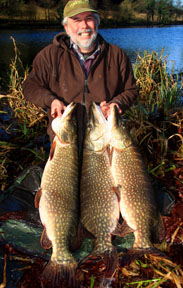