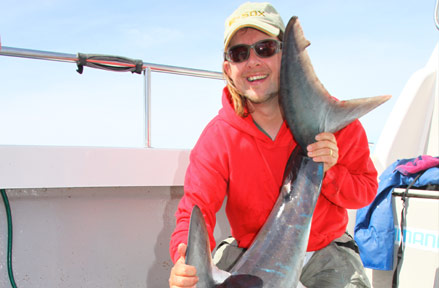 Edging ever closer across the Atlantic comes the warm water fuelled by the Gulf Stream and in its wake comes a legion of sharks, thousands of them heading towards the rich hunting grounds of the Celtic Deeps.  With their skin the colour of blotting paper soaking up ink from a fountain pen it provides a formidable camouflage in the abyss of salt water while their huge pectoral fins propel them effortlessly into the strike zone; being a Pollack, pouting or mackerel from June to October is not good. For the angler on the other hand this migration is enough to spread excitement through the very core of the most seasoned – hunting blue sharks sits at the pinnacle of sport fishing in the British Isles.

‘Shark season open’ were all the words Wayne Little and I needed to hear from Andrew Alsop, skipper of the legendary White Water. Better still there was a one day gap in the weather where a high front held two lows apart giving us time to set sail, so provided we headed to Pembrokeshire immediately an adventure would be assured.  Given that approximately 50% of trips are lost to the weather in this wild wilderness, ‘no’ was never going to be the answer we gave Andrew.

As dawn flickered on the horizon the boat had already long since left the world of humanity to visit one controlled by fins and scales.  To escort us on this journey and show nature’s softer side a pod of dolphins weaved in and out of the wake.   To many such a place could seem lonely and desolate but I feel nothing but liberation as the mobile phone signal dies and the knowledge that the only people you will have to share your day with are the ones you chose to.

Two hours in and at last the engines began to lose their roar - a cue for the chumming to commence.  A concoction of smashed fish and oil was vital if any sharks were to find us in the never-ending sheet of blue.  Partly experiment and partly to further enhance the potent mix I had brought with me a bottle of Richworth’s mackerel oil whose putrefied concentration just had to be a winner.  Before I could give Andrew the recommended dosage of a couple of drops he deposited the entire bottle into the bucket!  My god it was like setting off a stink bomb and I wondered if we had overdone it no matter how vast the expanse of water was. Only time would tell.

Engines cut completely White Water was put at the mercy of the sea and the chum bags were thrown over the side, free to release their cargo.  Next came the 4 rods to be fished at various depth, each supporting a whole mackerel snout hooked by forged and sharpened metal.  While we paid out line from wide drummed multipliers a minke whale no more than 10 yards off our stern spouted the commencement of fishing.  Spellbound I watched as this huge mammal passed us by only for the moment to be broken by the radio crackling into life.  Mayday, mayday  - man overboard’.  Another soul had been lost to the Atlantic.  Was I in heaven or hell?  There was however no time to ponder as the word ‘shark’ left Andrew’s lips.    A grey shadow had taken station behind our closest bait but this was no blue!  A year round resident to our shores, the porbeagle, had locked onto the oily flesh and with a flick of the rod tip bringing a sudden movement to the mackerel hundreds of razor sharp teeth grabbed hold.  In response I set the hook firmly in its jaw knowing full well that such an act would give rise to a bad back and a screaming clutch.  This is truly a battle that both sides can win and only when half an hour later Andrew’s noose tethered the beast could I be confident of a photo. 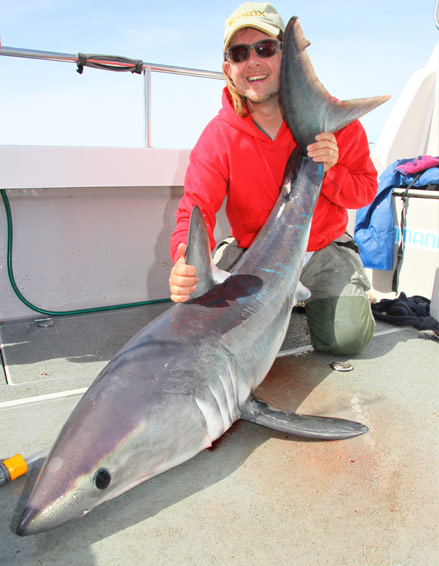 On any normal trip the rest of the day would then be an anti-climax but we were still to experience the enormity of a basking shark filter feeding alongside the boat and a big blue eating Wayne’s bait within inches of the surface and buckling his rod over beyond safe limits.  Confirmation once again that there is little to match what is to be found off the Welsh coast.