Salmon On The River Nith 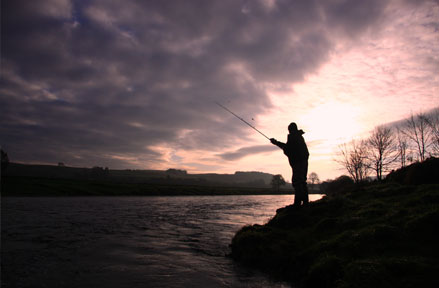 I enjoy salmon fishing in Scotland and the following is an account of my last visit, which I'm hoping to repeat again this year!

Smoke poured out of the chimney of an old crofter’s cottage with its white washed walls and slated roof desperately trying to retain the heat that Jack Frost wanted to steal.  Outside, the landscape had already been taken prisoner, locked under an icy shroud.  The river at the foothills of the Nithsdale valley had fared little better with fog engulfing its path swirling down from the hilltops.  A winter’s dawn in Scotland can be a cruel affair although as with any savage acts by Mother Nature the outcome is nothing short of spectacular.  Perched on an escarpment the fishing lodge had afforded me a grandstand view and now with the sun’s arrival on the horizon all set to bring with it salvation, there was no place I would rather have been.  A long journey north seemed a small price to pay and that was before I had even wet a line.

As a guest of friends Ken Wheeler and John Rodger, my mission was to try to tempt a grayling, or a salmon, from the river Nith – a waterway which traversed a farmland flood plain while tumbling over a stony, rugged bank side interspersed with Scots pines before pouring out into the Solway Firth at Dumfries, all under the watchful eyes of dippers, buzzards and occasionally the enigmatic osprey.  Beneath the surface life was equally splendid, if not harsh given the river’s cool temperature and Ph level.  Here coarse fish had no foothold giving way to Arctic species.

Ever generous, my friends sought to impart their game fishing knowledge on me and suggested a certain Raymond Fisher would be the best person to assist with the quest.  Instantly I took a liking to Raymond who certainly quashed any stereotypes I may have had about salmon anglers!  A Cumbrian lad whose speciality was the black art of worming, schooled by his granddad since boyhood in methods some may have found unpalatable he had enjoyed a colourful education but nevertheless his credentials as a countryman was beyond reproach.

My apprenticeship started with bait collection, namely black headed worms unavailable at tackle shops but found living under decaying cow pats!  A poker is inserted into the ground 6 inches from the excrement before being gently vibrated, or rattled, for a few minutes.  Then the same process is carried out next to the ‘pat’ with the net result being up to 50 worms appearing out of the ground.  With total certainty Raymond informed me that they had been fooled by the vibration into believing he was a mole.  The tricks of the trade didn’t stop there with an overnight stay in spagnem moss to toughen them up as only then would we have the perfect bait.

First lesson over – next came the tackle selection for a would be wormer.  A barbel style rod had its eyes threaded with 25lb braid before a running ‘jumping jack’ was slipped on, followed by a bead and swivel.  Then 2 feet of 18lb fluorocarbon to a size 1 hook.  The aim here being to just use enough weight to trip bottom while keeping the rig moving at walking pace across the flow.  Four to 6 worms were then threaded up the hook and onto the line.  These would temptingly pulse in the river like tentacles.  Again my teacher was matter of fact regarding this combination telling me to ‘make it look like a squid and the fish would take it’.  I by now was ready to partake in the dark side so with a rod each we waded out into the flow and began a methodical search for the silver tourist.  A cast, a bounce through the swim and a step downstream before recommencing the process until the pool had been thoroughly investigated.  Angling in this manner allowed me to become lost to outside thoughts and from the moment I began I became intoxicated by the process.  I could feel the river talking to me in a form of Morse code as the tip pulsed and the braid trembled, giving an a constant air of expectancy, waiting and hoping for sign.

The notion of bait fishing being easy was quickly dispelled as both Ken and John troubled the scoreboard with the fly while a take failed to materialise for us.  At least our quarry’s presence continued to be confirmed by the occasional salmon taking to the air in a leap of defiance while below I imagined the cocks chaperoning their harem of hens over a red in preparation for spawning.

Unperturbed as the week wore on Raymond waited patiently for the climate to change and the balance shift in our favour while weathering the cold which tore through our waders with copious amounts of hot ‘tattie ash’ (potato stew for the uninitiated).  A wet front needed to sweep over the west of Scotland bringing with it the wind to ruffle the river and awaken the salmon.  To pass the time I occasionally changed tact and sought comfort with the grayling which really deserved a more concerted effort, especially given their size.  I had however become obsessed and needed to connect with a fish that had roamed the Atlantic, covered thousands of miles while all the time having a destiny which was to cross my path.

The horizon’s colour at first just became a little more saturated before a veil of cloud filled in the blue canvas.  The air once still gently pushed against reddened cheeks building momentum.  ‘Marra (mate) we will catch yan (one) soon’, was Raymond’s response and my concentration intensified.  The cast saw the worms hit the surface but never find the river bed as the rod tip sent my brain a message as it thundered round.  Spellbound I watched not only a hen salmon leapt with my braid trailing in its wake but its cock companion also following suit.  Then in slow motion the hook which was trying to hold it captive was flung free and my tenuous link was lost.  Shell-shocked I questioned whether or not I had imagined the whole event but concluded it must have happened given the stripped hook and limp line.  This though wasn’t the time to seek sympathy as the weather was changing and the salmon were beginning to run.

Together Raymond and I stood in the river unrelenting even in the face of a storm intent on battering us with wind and rain.  Day took on the light values of night and waves more akin to the sea rolled down the Nith.  There in the commotion fish head and tailed as the river came alive and in this maelstrom I finally understood why there was so much fuss about salmon fishing.  Their migration past me brought with it a constant shifting of targets and alongside this was an air of excitement that I have never felt before and when braid was snatched out of my fingers and a strike made in response the arc of carbon against the tempestuous sky liberated my mind from every worry and stress it had ever taken on board bar one – would I land this salmon?