Gently the lemonade bottle bobbed in the jade coloured water under the direction of the Gulf Stream while some 20 feet below a mackerel flapper responded in unison, rising and falling in a slick of oil.  The large metal hook impaled in its flesh occasionally glistened in the deep dark abyss trying to tempt a response from a fearsome opponent. But what was this adversary? For the answer the path of the stout monofilament, which joined these components, needed to be traced as it lead into the sky before heading towards the vessel that was also drifting at the seas mercy. Along the hull the words Whitewater were painted, the famous charter boat was once again on the hunt for sharks. On her deck stood Wayne Little holding a rod, patiently repositioning a rig which only 10 minutes before had helped me land another big blue, just part of a day when a new personal best of 155lbs had been hauled aboard.  The batten now though had once again been handed over to Wayne, who had also sought the guidance of skipper supreme Andrew Alsop in a bid to beat his own biggest fish which happily was achieved with a 120lb predator after just 5 minutes of the day commencing.  It didn’t overly concern us then that the sun was setting fast on the horizon heralding an end to the trip but as is so often the case in the Celtic deeps the voyage had one final epic story to deliver.

It came without the expected savagery as the bottle became energised by a delicate tug on the line.  Then it keeled over as all suspended weight was removed.  No matter how gentle, it hadn’t gone unnoticed with the wily skipper positioning himself alongside Wayne.  Without the slightest rise of tone in his voice he offered an observation ‘the biggest fish have no reason to run when they start to feed’, and I swear I saw Wayne gulp in response to these prophetic words.  Both sides then waited to see the other’s hand but the shark blinked first forcing the bottle to follow a new direction – Wind!  Wind! Wind!  Andrew barked his orders as a mad man spun the multiplier’s handle forcing out all stretch from the line until the carbon yielded into an arc.  The hook had been set and below the beast writhed in anger. 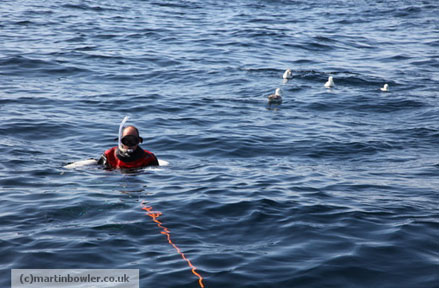 The words which accompanied the tortured clutch’s desperate attempt to remain in control have no place in a family magazine but in Wayne’s position with the Atlantic determined to rob him of his prize I could sympathise.  This was man’s fishing and in such a brutal world colourful language was acceptable.  No matter, the monster was unimpressed and sought to dive deeper not once but a dozen times torturing the angler who sought to tame it.  This argument wasn’t going to be settled quickly and we were about to find out if Wayne could step up to the mark or be broken by the beast.

Fifteen minutes in he didn’t look great and 5 minutes after that the situation looked dire as a sickly complexion washed over his face. Each breath got stuck in the throat and his tongue had been dusted dry. He was on the ropes and the shark only needed one more power dive to deliver the knock out blow.  Wayne needed to dig deep and take on the spirit of Quint with gritted teeth and a bloody minded attitude – ‘back home we got a taxidermy man and he gonna have a heart attack when he see what I brung him’!  Whatever the case and where ever he found the inspiration the rod now started to inflict its own punishment on the shark and suddenly the drinks bottle popped back on the surface as line was won back.  Wayne’s hands shook with a combination of fatigue and excitement and we all knew if he could keep his head the tide was turning.  His opponent though was a wily old fox and started to force a path directly underneath White Water trying to snap the taut mono against the hull.  Time and time again Andrew raced into the cabin and tried to out run the shark forcing further strain on Wayne’s ever wilting frame.  ‘Come on you son of a bitch,’ he screamed soaking up more punishment the monster threw in his direction and although he was suffering the shark had no place left to hide.  Heaving with all his might, every turn of the reel handle was hard won but it was won and the uptrace came out of the ocean.  The final act had come but it was a perilous procedure that now had to be conducted. 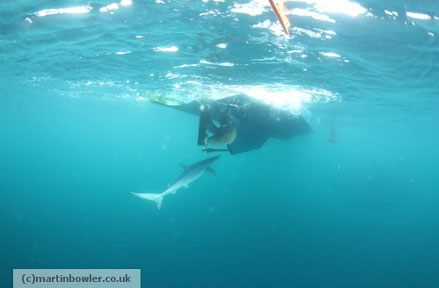 Andrew donned a leather glove and wound the wire tight into it trying to control the beast like a dog on a lead. The first attempt failed sending a wake of water into the air and a panicked Wayne running down the boat desperate to unwind the slack around his rod tip.  These were dangerous times and there would be no second chances.  The next act saw the shark remain docile for a split second as it was pulled alongside for another attempt. Andrew acted without hesitation and seized the moment snaring the beast in a wire lasso before all hell let loose.  Wayne dropped the rod and dived on the rope, ‘heave’ the skipper screamed ‘heave’.  For a few seconds nothing happened and then the tension told as an azure blue back and a set of teeth big enough to eat a child slid onto deck.

‘It’s got a big mouth that will take your leg off,’ Andrew warned and Wayne and I made a swift exit from the shark’s path.  ‘Holy cow, look at the size of that,’ was all Wayne needed to say as a new British record of 222½ lbs stared back at him.  A tale to tell the grandchildren of that there was no doubt. 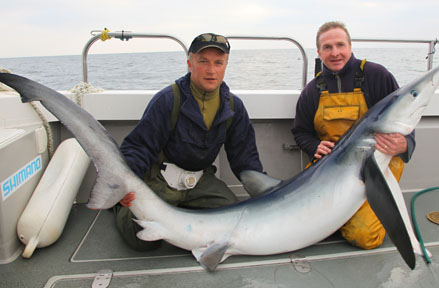