A sea eagle soars in air as pure as the water below as Odin’s words whisper across glaciers and fjords. Mountains rise higher than clouds and the ocean leads to the end of the world. This is where the Gods call home and at night the Northern Lights show the reflection of the Valkyries’ armour as they march towards Ragnorok. Soroya, an island in the furthest reaches of Norway and inside the Arctic Circle is where mythology and reality merge, for here there is no need for folklore when it comes to fishing and this was the reason I had travelled to the end of the gulf Stream to experience such a magical place. 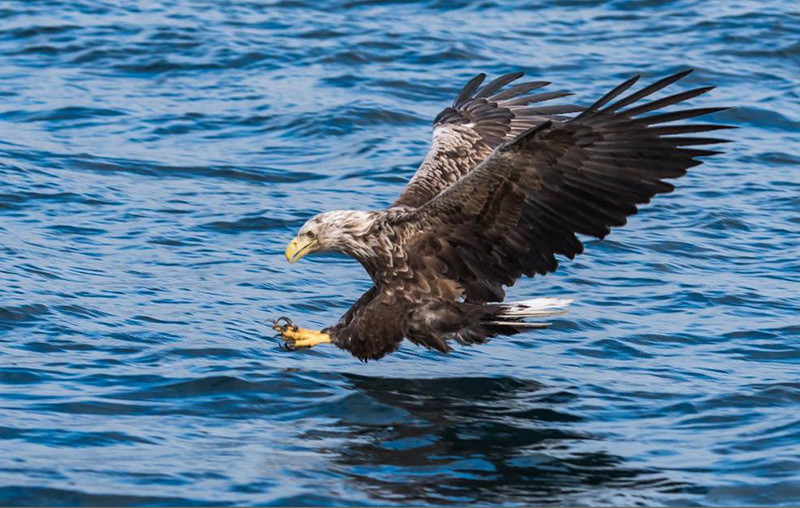 Father and son Dan and Daniel Eriksson, originally from Sweden, had kindly invited me to Norway. A stormy afternoon saw the small plane I was travelling on sweep in over white-capped waves and mountain peaks on the last leg of a surprisingly easy journey swapping Heathrow for the solitude of an island where reindeer outnumber people. Within 30 minutes I was at Camp Halibut enjoying a cup of coffee and listening to tales of huge fish. The northeast Atlantic reached like me its destination here before the Barents Sea takes over and here, like everywhere ocean currents converge so fish congregate. Add in the lack of humanity raping the environment and it’s no wonder some of the best sea fishing in the world was going to be on offer to me. With Daniel, an expert, as my guide it was hard to sleep after a lovely evening making new friends because I knew that come morning there was a very special adventure awaiting. 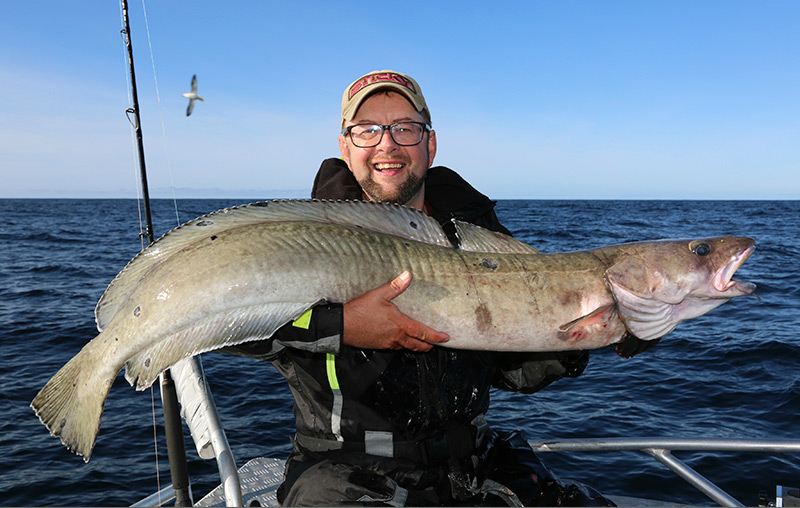 I wasn’t to be disappointed as the sun rose in spectacular fashion, it would soon disappear totally for 3 months but for now it would shine and stay shining for every day we fished. Unsurprisingly breakfast was devoured quickly and I found Daniel preparing the boat along with Nikolas Alsterlund, a friend and talented photographer, who had come to assist with the voyage. I have fished long enough to instantly know if I’m in safe hands and as the tackle was prepared and Daniel spoke of the tactics we’d be using I was in no doubt he knew exactly how to catch fish. Anglers visiting the camp could hire just the boat along with everything else needed but personally I don’t understand why you wouldn’t want an expert by your side. That said I watched him talk to a group of customers who were doing exactly that and he went out of his way to point them I the right direction. I like such attention to detail and customer care so as our boat slipped its rope I was desperate to begin fishing. 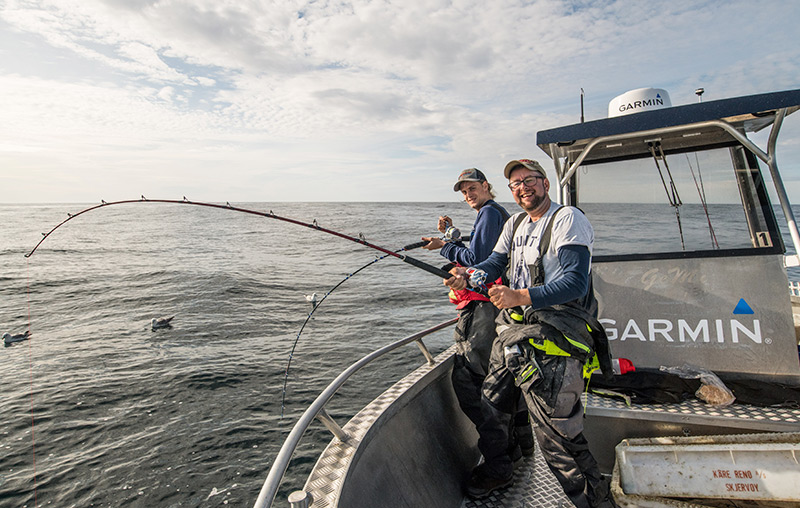 Normally a sea adventure can’t begin until a long journey has been completed but here we begun trolling for halibut within 10 minutes next to a cliff face where the different layers of rock could be observed which told the tales of the past in chapters of a million years alongside the weather beaten peak which looked like Thor himself had flattened it with his hammer. Beneath the surface where the bottom changed to sand halibut patrolled and here we pulled soft rubber fish imitations on 400-gram jig heads attached to rubbing leaders and 70lb braid. Accepting what was commercially available wasn’t Daniel’s style especially when it could be improved and was why 11/0 stingers with 2 cable ties around the shank were cut off at angles and inserted into the tail, which once again told me I was with an angler at the top of his game. Then they were kept close to the drop off via the echo sounder and we waited for a hit. Unbelievably the black wings of a halibut uncloaked themselves from the bottom within minutes and they soared from the seabed to collide with my lure. I struck into a fish that had no wish for me to keep the braid on the multiplier forcing the spool to immediately capitulate. Then as quick as it hit it was gone and unbeknown to me at the time I would never make contact with this beast again. Angling is a challenge that doesn’t always go to plan and for some inexplicable reason the halibut disappeared into the abyss apart from a wonderful solitary specimen to Nikolas. Daniel tried and tried again to lure them back but sometimes nature takes control. This however isn’t a story of woe because while Neptune took with one hand he gave generously with the other. Taking a fishing holiday to Soroya means a plethora of species and the best cod fishing in the world. There was no need to be disappointed, in fact I loved this place even more; wild, challenging and rewarding in equal measure. 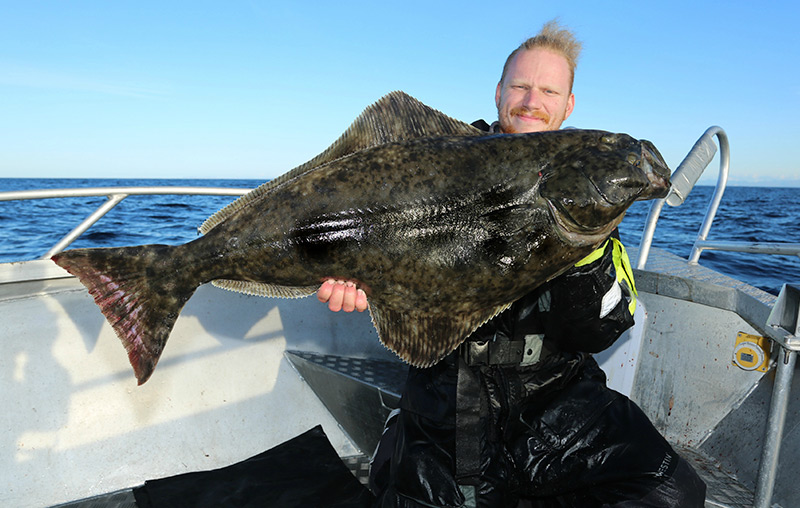 Offshore sat another special location where the last embers of the Gulf Stream reached an underwater reef, formed millions of years ago by icebergs scraping the rocky surface. Here sat a wealth of aquatic life inside a forest of coral - cod, coalfish, ling and so many other wonderful opportunities. 30lb class rods were the weapons of choice here with 0.36mm braid loaded onto multipliers. A 200lb rubbing leader came next with a metal boom and 600 gram lead sliding freely. The 6ft hooklength was also 200lb alongside 2 6/o trebles. For bait we used coalfish the size of cod found in my local British Channel with a hook placed in the head and tail with the swim bladder punctured. When Daniel nodded I lowered steadily down and followed his instruction as he called out depths from the echo sounder. A succulent bait fluttering down into a pit of cod was always too much to ignore for this hungry aggressive specimen and a huge mouth sucked it in, never to return. Fish the size that I could only dream about at home became commonplace as we searched the sea and my arms ached as both muscle and carbon buckled. I came in search of halibut but left with stories to tell of cod to 48lbs and a special world. 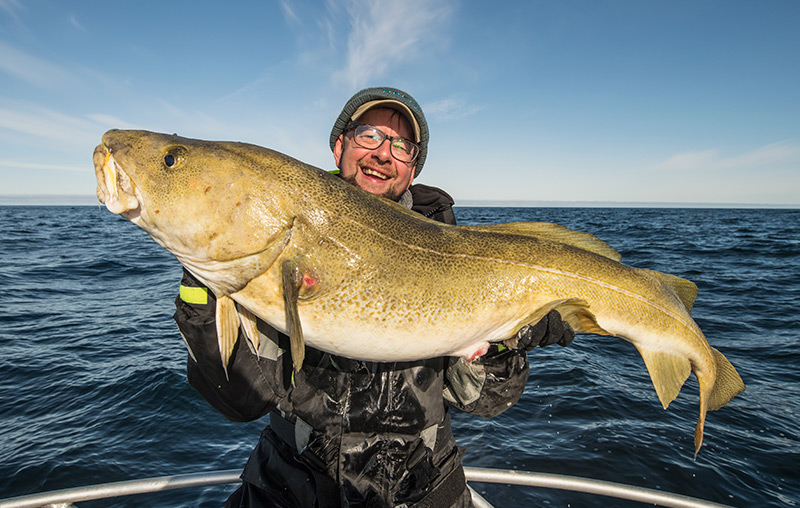 If you would like to experience how sea fishing should be I strongly suggest you visit Dan and Daniel – they’ll show you a place to wet a line fitting of the Gods that call Soroya home.

Accommodation and fishing is available at Camp Halibut only 30 minutes drive from the airport (you can reach Soroya from Heathrow in approximately 7 hours). It’s self catering and you can choose to hire a boat or be guided during your trip – catching supper is easy and there is a local shop 10 minutes away. Terminal tackle is available to buy and rods, reels and survival suits can all be hired. Dan and Daniel’s intimate knowledge of the area is free to all customers. 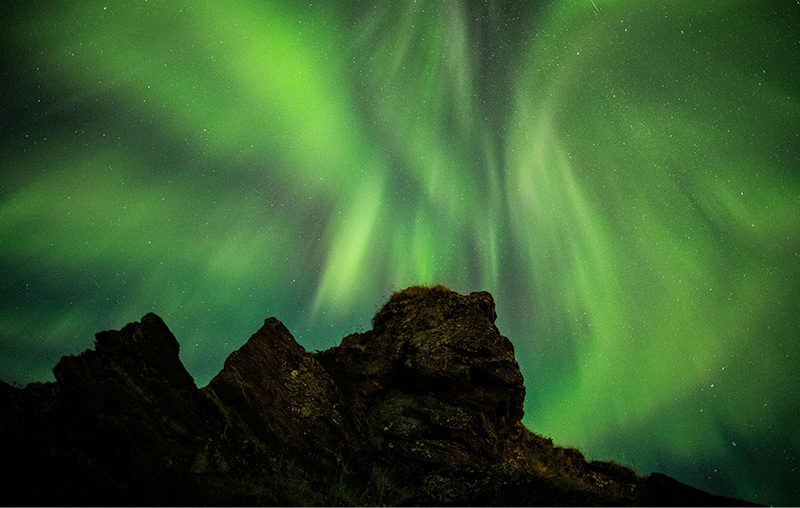