The river Nith bisects the pastureland of west Scotland in Dumfries & Galloway, cutting through a tapestry of farmsteads, conifers and broad leaf woodlands. Life here isn’t as extreme as other parts of the country making it fertile both above and below the surface. Many travel north to cast a fly for Scottish salmon then sit by a warm open fire, sipping a wee dram and recounting both success and failure in the company of such a noble fish. My journey across the border then had been well worn by other anglers and I also spent the evening with friends at Friars Carse enjoying good company and the menu on offer, but as I prised myself from the comfy sofa and headed off to bed my dreams were filled by another challenge – the Lady of the Stream. 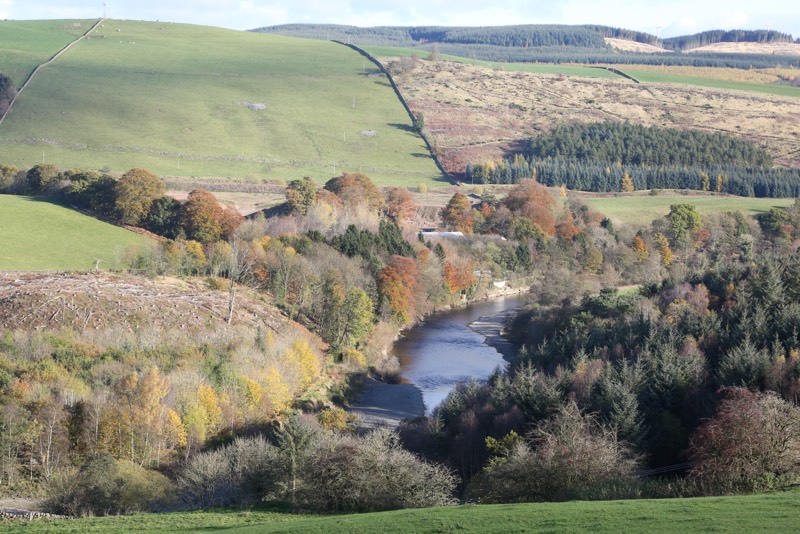 In the morning as I pushed open the large wooden door of the hotel that was originally a friary I had expected to find ice encapsulating everything before me, fortunately cloud cover had provided insulation which lucky as time was of the essence meaning that there was no need to scrape the truck’s windscreen. Snow was due by dusk and in all probability a rising, coloured river would prevent me catching grayling. Taking the back road I followed the river’s course looking down from the hill top until 15 minutes later descending to the valley base and the Bajar fishery. Here the Nith tumbled through a pool and swept over rocks, albeit at a slower pace than normal with a lack of rain in the catchment over recent weeks. The evening before my friends, while keen to catch salmon had told me where to look and after donning chest waders and a range of thermals I headed to an area known as the ‘sand bed’. Here the river slowed marginally and deepened offering cover in the clear water that currently filled the Nith. The conditions and location looked perfect and I set about preparing the tackle. 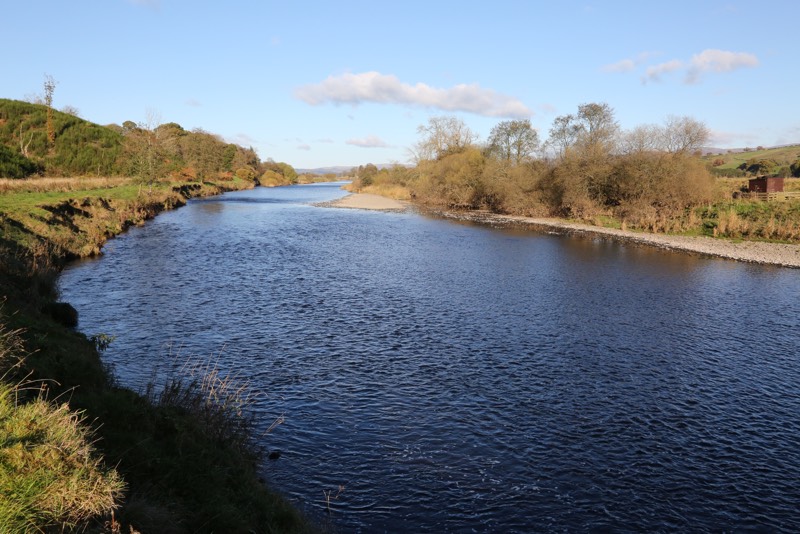 Control of the float and not finesse was the key attribute required and I set about threading 4lb Specimen Plus line through the rings of my Drennan Acolyte rod to ensure I stayed in charge of the Nith and not the other way round whilst a 5 swan loafer gave me all the buoyancy I would need. The majority of the bulk shot sat at three quarters depth with the dropper weights a combination of BBs, no 4 and finally a single no 6. Crude yes, but I learnt long ago that fancy delicate shoting patterns have no place when chasing big fish in powerful rivers. A swivel positioned at the second from bottom shot was there to attach an 8 inch hooklength of 2lb 12ozs terminating with a size 14 Kamasan B520. South of the border I generally prefer corn and maggots but today I had a pot of brandlings that would be perfect for my quarry. Instead of feeding little and often trying to draw the grayling to me I intended to be highly mobile, taking a few paces downstream after every trot. With the only offering being my hook bait it was vital I passed it by a willing mouth but if I did I was sure the brandling would be taken. 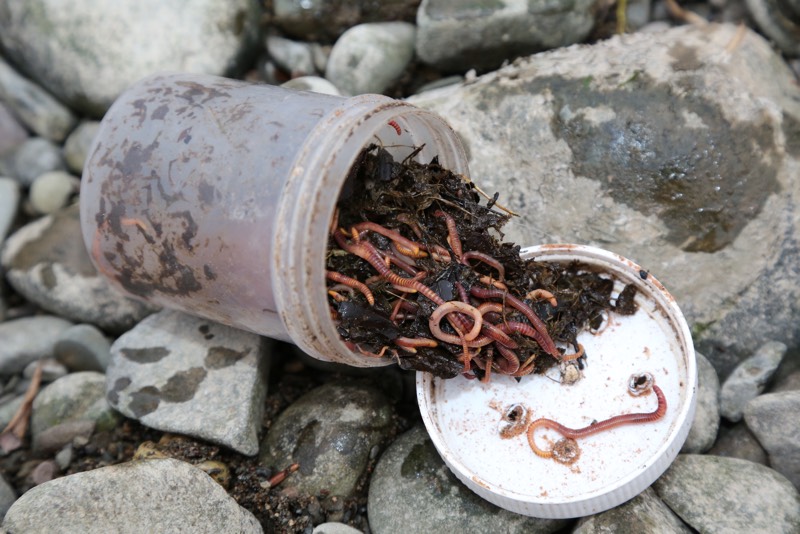 All set and with a pouch of spare bits and pieces around my waist I waded out into the river, only stopping when I was knee deep. By now the sun was battling the cloud for control of the sky and the tussle spread shades of pink and yellow as far as the eye could see. Scotland this morning was a wonderful pace to be and all I needed to complete the connection was a grayling. Before I could make a cast a big cock salmon jumped free of the river and angrily snapped its kype jaw. A stunning sight on a winter’s morning but it would have a huge impact on the sport enjoyed even though I was as yet unaware of this fact.

Grayling are an obliging creature that could never be described as cunning or cute so if the truth were known I wasn’t surprised when a fish around the pound mark quickly came to the net. What was surprising however was the lack of action that followed as I worked downstream save for 2 more salmon going airborne over their redds. In all probability it wasn’t me that had disturbed them but grayling going too near to them which in turn caused an aggressive response. Catching roach when troubled by pike isn’t easy and while my target today wasn’t being eaten they were harassed, meaning eating a worm wasn’t at the forefront of their mind. Alas my journey north had taken 6 hours so there was no returning on a better day, I continued to wade downstream trying my hardest to get another bite. 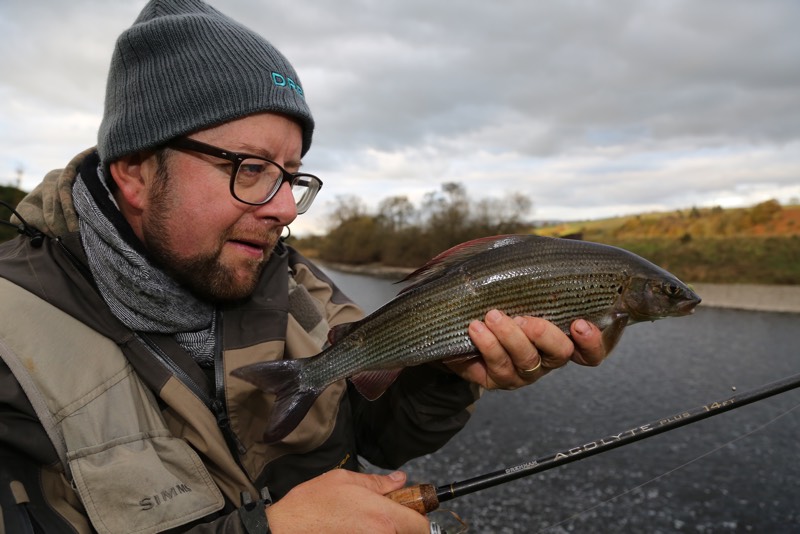 Only a couple of coils of line had left the spool and the float tip sat no more than 2 rod lengths away when the brandling found favour. For a second I thought a salmon had snapped at it but then I saw the red tipped sail break the surface. Its size left me in no doubt that I was no playing a big grayling. My hook had found an anchor in the boney mouth but for how long? A muscular body, fast flow and an erect dorsal fin can cause a loss at any minute so once I knew what was at stake I could only relax when the landing net swallowed a very big fish in perfect livery with shades of silver,grey,jade and purple on display. It was at this moment I realised I had left the scales in the truck and for the first time I can ever remember with a specimen I chose to simply only admire a fish that I suspected was close to 3lbs without getting its not so vital statistics. I didn’t need a number to tell me it was special or how wonderful the scenery that surrounded us was. Then I opened my hands and it was gone although its memory will never be lost.

I stayed at Friars Carse hotel, they have their own stretch of the river Nith. Tel: 01387 740388 or friarscarse.co.uk