With the end of the year looming I always like to look back at a few of the adventures I have enjoyed over recent years. Here is the one of my favourites:

The great Glen fault creates a range of natural phenomenon’s from whirlpools, falls of Lora and the depths of the Firth of Lorne but it’s the monsters which inhabit this area, also known as the gateway to the isles, that I wanted to meet. In the lea of islands Kerrera and Mull the mainland town of Oban offered a base for the adventure. With its horseshoe bay shielded from Scottish storms a vessel could be hired here along with a knowledgeable skipper. With everything then in place the challenge could begin, providing the 50lb line could tether the giants. 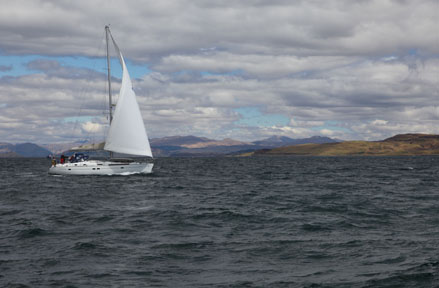 Monday 3rd May
Ten hours driving may well seem a torturous affair but the time soon passed with idle chit chat and mickey taking. Save for a ½ hour hold up just outside Glasgow it was smooth sailing though Lamps did blame me for making him sick! Yes, I did buy the Red Bull and sweets but I didn’t make him eat and drink the whole lot and you would have thought that at his age he would have known better.
Arriving at a sea front hotel though the moral took a turn for the worse. Skipper Ronnie Campbell’s boat had broken and there was no chance of it being sea worthy the following day which was a real blow given his reputation. To compound it further, he’d broken a rib and badly burnt his hand in a couple of freak accidents. Perhaps given his luck it was safer not to be on his boat! Ronnie really is the top skipper in the area and I hoped we would get out with him later in the week. All was not lost though as Donald, Ronnie’s friend, had been called into action for a 9am start but would he be as good at tracking the giant skate? Only time would tell and after a nice Italian meal I was ready for bed hoping that dreams would be of rod wrenching battles and fish as big as barn doors. 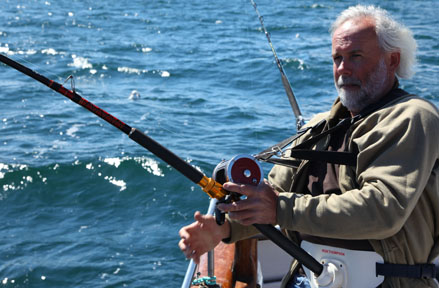 Tuesday 4th May
I staggered into my hotel room with a broken back and arms full of lactic acid and if that doesn’t tell you enough of the story then 7 fish over 100lbs to 202lbs should! It really was rod wrenching action with battles lasting over an hour as a constant stream of spectacular sport came our way. Many people travel the world to find this kind of fishing and it’s on your doorstep all the time.
Any reservations about our new skipper were soon dispelled as Donald proved to be not only a good fisherman but a great bloke as well. Within an hour and a half of lowereing down the double mackerel pennel rigs some 500 plus feet, I was striking into a brick wall. Next came a little skull-duggery on my colleague’s part by putting the body harness on upside down! Like the hunchback of Notre Dame in a straight jacket my spine burnt as if a hot poker had been put down it. Eventually I worked out the ruse and dispensed with the tortuous contraption but by now Lamps had stolen a march on me with his own tussle. After his performance last year when the skate nearly broke him he took great pleasure in landing his 165lb fish before me.
The day also saw success with a new bait – the inky flesh of a cuttle fish. Being the number one conger bait it just had to work and so it did with half the fish falling foul to its pungent, pulling power. Highlight of the day though had to go to the 200lb monster landed by Tim. After an eternity it was dragged through the fathoms only to hit the surface in a strong tide which for another half an hour prevented it from being boated. Eventually he had no option but to wind the clutch down as tight as he could and walk backwards, then run forward, gain some line and start it all again. Still the smile on his face as he hugged the beast was worth all the sweat. Luck and the devil had certainly been on his side with that battle.
Boy, I am looking forward to a hot bath and a wee dram of whiskey to try and recover for god knows what lays in store for us tomorrow. 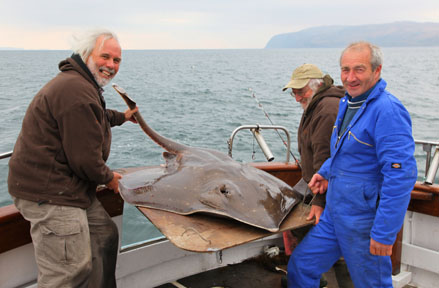 Wednesday 5th May
Sharing out pain killers over breakfast is an unusual way to begin a day’s fishing but this is exactly what we did to prepare our beaten bodies for another day afloat. Over bacon and eggs we nervously laughed and teased each other about who would break first. Ronnie unfortunately informed us that their was no chance of fishing with him on this visit which was disappointing but a extra pair of hands in the shape of Alex was going to be onboard the boat to help out.
Light winds and sunny conditions accompanied us on our boat journey out to the rich waters between Oban and Mull. Here the depth plunges away into hundreds of feet providing the habitat for the colossal skate. Lowering the leads down for minutes not seconds confirmed what Donald’s echo sounder read at 450 feet and with ratchets on, the wait began. Soon however the attention grabbing ‘tick tick’ saw Lamps preparing for the battle ahead by donning a butt pad and back support and only then did he wind down on his beast. Unsurprisingly, his sweating brow and grimaced facial features found no sympathy with his friends, although we both had a dose of our own medicine when two more ratchets ticked in prelude to suffering. These fights really are brutal affairs and my badly bruised groin did not want any more today. The skate weren’t listening however with 7 more fish to 165lb giving us a workout even Mike Tyson would be proud of. To compound matters further most were males whose aggressive attitude and line stripping power is not what you want after all the action.
This really is a spectacular place and with fresh lobster on the menu tonight night providing great hospitality both on and off the boat. I just need to find a couple more painkillers and I’ll be able to make it to the restaurant! 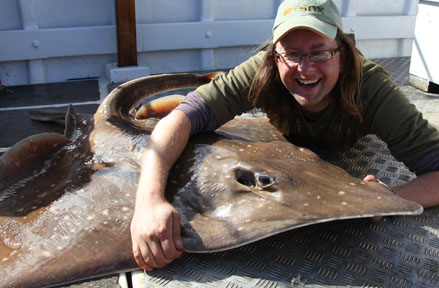 Thursday 6th May
With the sun on my back, nostrils full of salty scents and a rod compressed beyond comprehension I could think of few places that I’d rather be. The dual combination of a butt pad and a kidney strap did its best to assist by ultimately it was down to my own endurance and strength to win the tussle. To think the day had started off slowly with the tide running hard till lunchtime combined with a brisk wind suppressing the skate’s appetite. Donald had called it right once again as the monsters woke up. One, two, three – our rods were picked off forcing us to kit up and begin the challenge again. Once the outfit was clipped onto you there was no escape until the barn door broke surface and fell to the gaff. However hard it was certainly an experience not to miss out on, as you eventually meet a prehistoric creature, which seems to have more of a soul than most fish. Whether that is due to the length of the encounter or big smiling face I don’t know but when one of its giant eyes fix on you there’s little doubt that something very special is looking back at you.
Six more fish to 184b is more than even the greediest man could want giving a final tally of 20 fish with an incredible 17 over the 100lb mark. Little wonder that as we headed back for port laughter and smiles accompanied us.
Tonight Donald and Alex will be joining us to celebrate a special 3 days 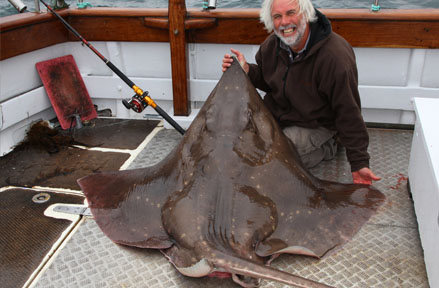 Time to head home and driving down the full length of the country found us reminiscing on the trip. The fact is clear though that if you want to catch a giant fish they are in this country and waiting for you so head for Oban but don’t forget the pain killers!