In the sleepy Wiltshire village of Great Somerford it’s hard to imagine that anything could set the pulse racing on a warm summer’s day. Bumblebees enjoying well-manicured gardens while birdsong can clearly be heard all day sitting well off the beaten track and the humdrum humanity brings. So save for gentle gossip in the corner shop or the church bells chiming all is quiet and the pace of life is blissfully placed on pause. Why then was I so keen to make the short trip from my home to visit this quintessentially English village? A pie and a pint in the Somerford Arms would have been nice but today I didn’t have time to add to my waistline because I had an appointment with Russell Wilmott at his new fishery. Three mature gravel pits of 1, 5 & 6 acres excavated decades ago under the stewardship of local farmer Charlie Porter, were an interesting proposition to investigate - Broadfield being stocked with trout whilst Big and Little Moor catering for a kaleidoscope of coarse fish. My truck weaved along the narrow lanes occasionally slowing for a tractor but with the promise of a new adventure that evening and the following morning I was in a buoyant mood even if the journey was conducted a sedentary pace. Fortunately the sat nav saved on any further delays and the vista of Great Somerford lakes were mine to enjoy. 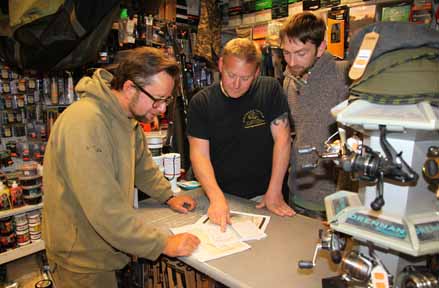 Living in Wiltshire I already knew how special this forgotten county is, a place to pass through on the way to Devon and Cornwall but never more than glanced at out of a holidaymaker’s car window keeping it exactly how the locals like it – quiet. Therefore it is full of hidden gems and from what I could see this was one of them. Each pit cried out to be cast into; a fluid piscatorial portrait framed in lush green that only lowland England can supply. 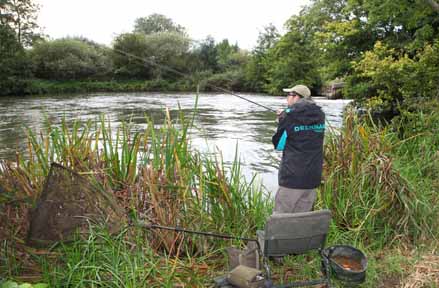 If you couldn’t envisage a float sitting patiently by the dinner plate sized pads and its pink flowers splayed open to enjoy the sun then you were obviously unfortunate never to have been schooled by Crabtree! An enquiry about the coarse stock made things even more appetizing because while carp and tench offered temptation big roach and crucians had me salivating at the prospects that lay ahead. The day still had plenty of time to run but I was keen to get going and make a first cast, only then would my connection be complete with the rod, reel and length of mono acting as a conductor to this new aquatic world I sought to understand.

Russell led me to a pitch illuminated in yellow iris that offered aquatic cover too for the crucians in the form of pads, which I diligently explored to find a sweet spot. With the marginal shelf falling away at a rapid rate fishing on the edge of the vegetation would see my bait sitting a long way from the all important underwater stems which were growing back towards the bank I now stood on. A slight recess in the pads however allowed me to fish in 3 feet less depth of water and importantly amongst cover, a seemingly small detail but vitally important in the quest for the pit’s rare crucians. 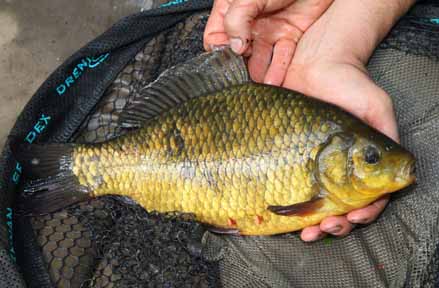 Fishing would be conducted here directly off the rod tip so a pole float was selected to ensure a bite was never missed. Only when I was certain of pinpoint accuracy with the plummet so the kernel of corn I intended to use would just kiss the bottom, did I feed the spot with a handful of mixed particle and pellet. This would be left to stew while I targeted the priming roach 5 yards in front of me. 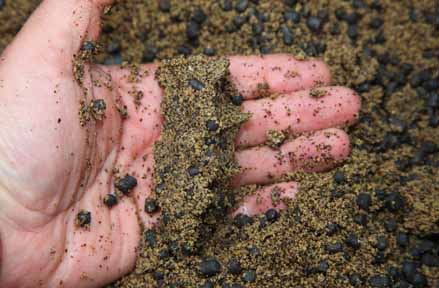 It seemed logical to use a loaded waggler and fish on the drop with red maggots spraying free grubs on a little and often basis. Indeed bites came readily and for the remainder of the day I was a whirlwind of casting and pulting meaning that the beauty around me faded away and my only focus was on the float tip. 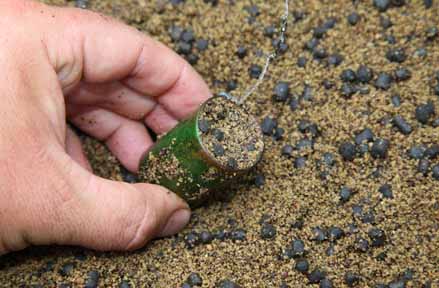 I knew it was the wrong approach after the first hour but the next bite syndrome had kicked in. So why was I sceptical when I received a bite every cast? Well, it was fun but the stamp was small and I needed to rethink if I wanted a specimen. The last try of the day therefore was with the lily pad set up and immediately I knew the next morning would see me fish differently as a pound plus roach jagged its way to the net. A pint of particle was duly dispatched to the ‘sweet spot’ and I retired to the truck for a few hours’ kip.

At 4.30am mist skipped across the surface in front of me and the dawn chorus told me the birds were awake. I was in little doubt that the fish were also on the move even if the lily pad flowers refused to open, having a lie in until the sun climbed higher in the sky. Impaling a single kernel on a size 12 hook it was soon heading to the bottom, as did another handful of free food. The pole tip responded by never stabilising on the surface and appearing as if an extra shot had been placed on the line overnight. Still sleepy I waited a second too long but it didn’t matter as the strike still resulted in an angry tench do its best to give me a bad start to the day. Looking to my left I saw Russell enjoying a similar tussle with the same conclusion as mine – a broad grin and a full landing net. Beautiful roach then became responsible for most of the bites, occasionally punctuated by another angry tinca. It was pleasure fishing at its finest and it made me forget the crucians until I struck once more. Heavier than a roach but not as angry as a tench I had my suspicions when the battle was conducted by the fish swimming round in circles and then the surface turned golden as a special little fish revealed itself to me. I was overjoyed at what Great Somerford had given me but please don’t tell anyone else because I love Wiltshire’s hidden gems! 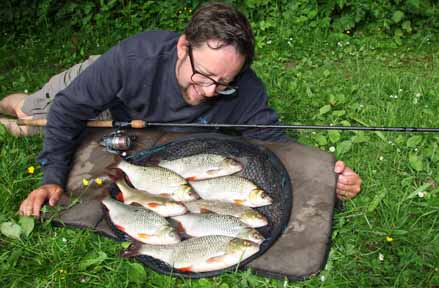 1. Understand how aquatic plants grow as this will tell you where to put your bait.
2. Sometimes catching lots of fish isn’t the best way to lure a specimen.
3. In summer mornings and evening are generally the best times to fish.
4. Don’t rush plumbing up especially when targeting crucians – your bait should just kiss the bottom.
5. Even if I’m fishing with a rod and reel I often use a pole float. It will only work when targeting areas under the rod tip but here it is superior to a waggler. A top and bottom float also makes accurate plumbing easier.

Contact: Great Somerford lakes offer both trout and coarse fishing on a season ticket basis with details at www.greatsomerfordlakes.co.uk or ring Russell Wilmott direct on 07540 548438.