The night was cool and the wind northerly but I had the season of Spring on my side that kept me confident as I went to bed, curled up in a sleeping bag convinced that at some point during darkness one of my 3 rods would wake me. Each one had its terminal tackle staggered along a gravel strip at 80 yards from the bank flanked on each side by dense beds of Canadian pondweed. The channel had been formed over the previous month by the fish harvesting the rich vegetation and in turn ripping it up to the point it had been demolished in an area 20 feet wide and 50 yards long, leaving in my opinion the perfect place to position a rig. All 3 set ups were identical starting with 30lb braid, as I still needed to overcome the weed closer to me should I win a bite followed by 24 feet of fluorocarbon connected by a FG knot. The reason for the switch of material was to be more unobtrusive as the clear line would be invisible to my quarry and sink out of harm’s way as it entered the swim. 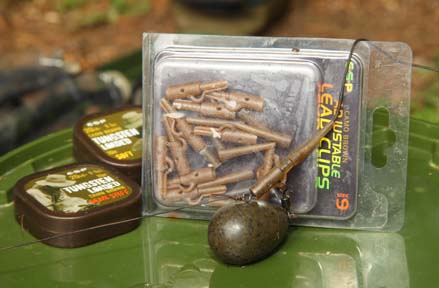 An ESP adjustable lead clip sitting on 6 feet of lead core came next with the tail rubber only just squeezed on so that the 4oz dumpy lead would be jettisoned quickly after the take, should it come. The hooklengths were my faithful 8 inches of 20lb semi stiff Tungsten Loaded to a size 5-Cryogen Gripper hook. 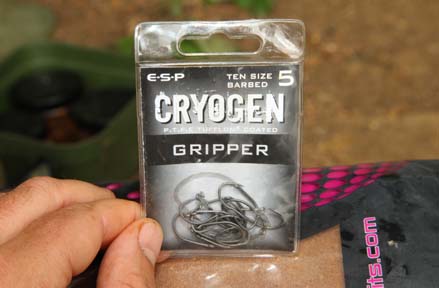 Via a knotless knot I had formed a hair rig long enough to have a 16mm Sticky Krill boilie sitting off the bend of the hook with a short piece of shrink tubing then sitting on the eye. When steamed I ensured I created an acute angle and the combination ensured the hook point would turn very easily into the fish’s mouth should it be sucked up. 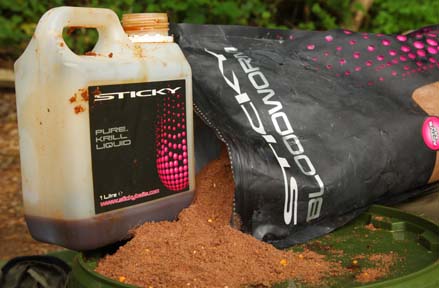 Each rig had landed with a solid thud on touchdown with the bottom but the middle rod seemed extra hard resonating down the braid and shaking the rod tip. Here, on the bed, sat a section of discarded pipe which was now used a rubbing spot and the yellow glow of gravel had been rubbed down to white stone and here, like with the other hookbaits along the strip, it had additional free bait fed to help attract attention as quickly as possible. I had made a bucket up of bloodworm Active mix dampened with both Krill liquid and lake water before pellets, cluster and boilies were stirred in making a concoction that would fill the water column from top to bottom. This was then evenly split between the 3 rods supplying both extra feed with maximum attraction and as the underwater tow grabbed hold the scent would spread far and wide over the pit.

The first night on a venue is always a fitful affair and as a fox screamed out across a starry sky I slipped in and out of consciousness with a vivid dream straining my mind. Huge shapes were drifting across the pit but in a form I struggled to identify, made impossible when the bottom was stirred up leaving just glimpse of a tail the size of a fan which beat at a frantic pace. To confuse me still further a shrill noise almost perforated an eardrum dragging me back to reality and there I lay dazed for a couple of seconds in a twilight zone until sleep gave way to the penny finally dropping. Now on automatic pilot a well worn drill kicked in as I grabbed the head torch and pulled on my glasses – I was even lucid enough to check my watch and note 2am as I headed towards the yellow barrel bobbin no longer hanging limp on the chain but wedged against the alarm, I had a bite! 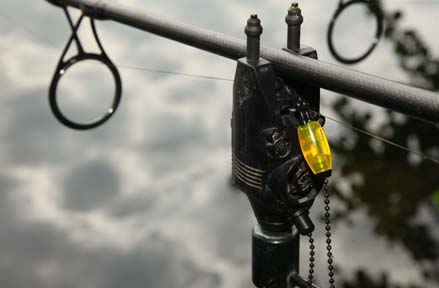 The reel spool rotated slowly but with conviction, giving braid to something determined to leave the gravel strip and I responded like any angler would – lifting the rod and trying to pull it back towards the zone. I admit I expected much more resistance but with the carbon hardly bent I cranked whatever was responsible to the spot it was hooked with ease and then onwards, ever closer to the bank. I was confused again and perhaps still hadn’t cleared my head properly as I asked myself if it was a tench or bream. No longer fearful of losing a giant I flicked on the torch but to my amazement that was exactly what I saw as the white light cut through the surface and a shoal of fry. Below sat a 4-foot long chub, or certainly something that looked like one and I spoke to myself in a surprised tone – ‘grass carp!’ I knew the venue held a dozen or so of the species, their size of fabled proportions and now I was staring at one on the end of my line. Fortunately experience had taught me what to do and, like a dog on a lead, I gently coaxed it towards the net ensuring it was well sunk for once mesh or carbon bow frame touched a single scale this placid creature would turn into a missile. I waited longer than normal before heaving with all my might, trapping the beast. In the net it went and that was the cue for it to explode, dropping the rod I held on as shower of pit water soaked my head and back. Thirty-seven and a half pounds and the first grass carp caught for a number of years. A freak capture but a new personal best and I was a happy fisherman when eventually I got back to sleep. 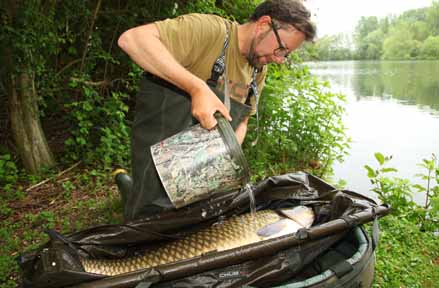 The new day wasn’t heralded with a splash of colour, in fact it was a drab affair, unspectacular but perfect for catching fish. I sat by the rods guessing which rod would go next and sure enough the middle rod came up trumps again as the tip, alarm, bobbin and reel spool all gave simultaneously. I followed the procedure of the previous night but was expecting that to end the moment I bent the carbon but no disbelievingly it continued on in a near identical manner right until the net and it happened again and again; each time I re-positioned the middle rod with a fresh load of bait! To go with the 37lb fish I now had a 39-12, 41-8 and 47lb specimen and each one a grass carp! It was a good job local angler Graham had come to help me with pictures and to confirm this indeed was real. We concluded that this surely was the end but was it really as once again another grassy found my Gripper hook not to its liking. They had all looked big but this one, well it was huge and as it swam past in the margin neither of us had seen its like. A submarine with a cloak of golden scales and I wondered how the hell I was going to get it in the net! Obviously I had to try and followed my ruse of sinking the net deep until the last second, only this time I had to drop the rod and use both hands in a final frantic bid to flip the tail in which was till hanging 2 feet out the back! Success meant another shower but I didn’t care. It was bigger than any before and the scales confirmed that – 49lb 12ozs! I then struggled to lift the beast for pictures smiling from ear to ear before Graham left me for his now late morning chores with the words ‘if you get a bigger one call me!’ ‘Don’t be ridiculous,’ I responded and we both laughed!

With the middle rod once again repositioned I sat on my bed chair and finally took stock of the situation, by now it was heading for lunchtime but conditions remained unchanged giving me a rather drab view across the water as I ate my late breakfast. I wasn’t destined to finish it however because something else was about to have its meal and out of the corner of my eye I caught sight of a streak of yellow as the bobbins collided with the alarm once more. Addressing the situation I watched the braid cut across the pit until it collided with what looked like a shark but what in fact was the tail find of another grass carp. An incredible sight and even at such range it looked the like a surfboard as it rolled in displeasure. Identical to all the previous encounters its route to my margin was without incident and then I could clearly see its amazing length, with row upon row of tea saucer size scales emphasising its depth as well. I had a carp that quite possibly was the biggest of its kind ever to grow in the UK and it resembled a submarine as it passed by! I needed to keep my nerve and execute the moment of netting with precision because this beast was bigger than the frame I would wield to make it mine! 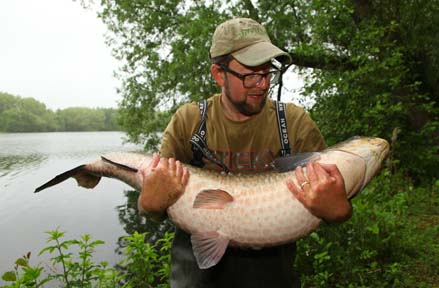 Crouched in position I could clearly see the size 5 Gripper caught in the mouth and it looked so fragile to be the tether for such a monster but its strength surpassed its size, holding firm as I once more dropped the rod to try and flip the tail in as white water erupted during those frantic seconds. I’m not ashamed to admit that I was now shattered and wondered how on earth I could lift it from the water onto the unhooking mat if it was big enough to cope which would be in question. For some bizarre reason a grass carp only begins its fight once caught so I decided to let it spend its energy while I regained mine and only then did I bring the brute ashore, careful to protect its immaculate condition. I had no hope of holding the scales so I used a pole and bar to tell me what I already knew – it was huge, no it was monstrous! The needle swung to 52lbs 10ozs and I wondered if in fact I was still dreaming and the day had not yet begun. Real or not I knew what I had to do next, a phone call with the opening words ‘Graham, you’re not going to believe this!’