After three consecutive disappointing trips abroad, I was rather hoping my luck would change for the better, and when my good friend Martin Bowler suggested a visit to his villa at Jurassic Mountain Lake in Thailand, it seemed like a really good idea. My usual escapades consist of fly fishing in fairly remote locations, so Martin thought that fishing in comfort for “captive” (albeit monster) lake fish might not be my cup of tea ? He needn`t have worried ! Maybe age is catching up with me, but the luxury of spacious air-conditioned accommodation, delicious cool “Chang” beer on tap within yards, and a full English breakfast delivered to our swim by a pretty little Thai girl, all went down very well, I can assure you !

Unlike one of my last year`s trips, (when my adventure travel company had neglected to book our outbound plane tickets !), all went very smoothly this time, and it was “champagne all the way” for the 12 hour comfortable journey to Bangkok. After this our cheerful taxi man had my pal Rod and I to the attractive resort and a cold beer in just over two hours, - a great start to a delightful week !

My aim was to catch a Red-tailed Catfish, which I had never even seen previously, and if possible an Arapaima, but in all event, to have a relaxed and enjoyable time. All tackle and copious amounts of bait are provided for each angler, consisting of 3 lb test curve rods and Shimano reels, one set up for carp (hair-rigs etc.), and the other for predators using fish baits. Our first day didn`t see a Catfish banked, but it was “all-action” with hard-fighting Siamese Carp, Rod and I catching seven each up to 65lbs, - outstanding sport, and they really do “go” ! 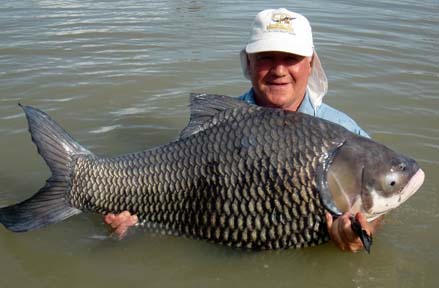 After nearly 12 hours of fishing and a nice shower, all we wanted was a nice meal and a good sleep, and the meals provided at the lodge were so reasonable and delicious, that neither of us felt the need to leave the complex during the entire week.

The order of the day fishing-wise was to put the hair-rigged large pellets well out in the deeper water for Carp, but for the Catfish the fish baits were most effective in the shallow margins, and the reason for this was undoubtedly that armies of Tilapia live there. These “spiky-finned” handsome little fish had been introduced as “food-fish” and have flourished to an amazing degree. They stripped our frozen Horse-Mackerel baits to skeletons in under 60 seconds, and we discovered that the best bet was to use Tilapia fillets instead of the provided baits. Seemingly they were reluctant to devour their own kind,- unlike those Red-tails which gobbled them up greedily ! The Tilapia were a “doddle” to catch on almost anything from bacon rind to fish eyes, less than a metre from the bank, and though I was slightly reluctant to kill and fillet them, it became a “must” ! 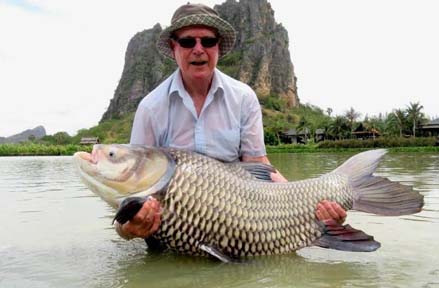 One day I noticed that they were pumping water in from a nearby canal, and figured that the fresh water must be attracting bait-fish – and possibly the predatory fish as well ? With this in mind I took the 14 weight fly-rod I had brought with me, fixed it up with a floating line, sixty pound B.S. leader, and an attractive Golden Dorado fly, tied for me by my good friend Rick Varley, and took to the water. It felt strangely pleasant, bare-footed in the margin with tiny fish of some kind nibbling on my toes, but, being luke-warm it was no hardship, and necessary anyway to get some sort of back-cast. In anticipation I started covering the area of moving water, and was amazed and thrilled when 4th cast there came a sharp tug, and everything went solid. The fish then took off in an unstoppable run of 80 or 90 yards as I shouted for Rod to bring the net! As you can imagine an angry 60lb Red-tailed Catfish can put up quite a battle on fly tackle, and it surely did ! Eventually however we managed to get it in the net, - and my week was made, as Antony, the guide, ran along for my camera ! Following this early success, I spent considerable time and effort persevering with fly tackle for another Catfish, - or even one of the huge Arapaimas which were constantly rolling and gulping in air, but with only one more “pull” for my trouble. Nevertheless it was all great fun, and “He who dares wins Rodney” – maybe next time ? ! 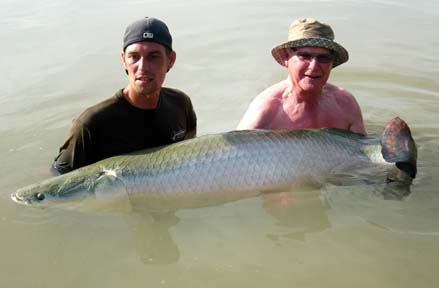 Rod managed “the holy grail” – a 100lbs plus Arapaima on the last morning of our trip, the take coming 30 seconds after casting in, and that really did cap a wonderful week`s fishing, which resulted in 66 fish between the pair of us, for a total weight of well over a ton ! My “ultra-keen” pal fished more or less constantly in the extreme heat, while I mostly took a mid-day break for a swim, beer and on two occasions – a relaxing (and very reasonable) massage.
We shall almost certainly return for a “rematch” next year, and if you fancy a week of aching arms in very pleasant and comfortable surroundings, and some immaculate monster fish, you could do a lot worse than think about it yourselves !

For more information on this wonderful venue, contact Jo Bowler on 07562307360, or [email protected]