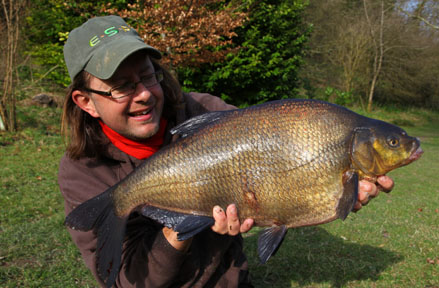 Read below to find out how Richworth helped me catch another great fish...

Darkness fell across the skyline brining the curtain down on a glorious spring day and in response my kettle found a perch on a ring of fiercely burning gas heating the well worn vessel which in turn bubbled the water.  In the time it took for steam to rise my indicator too rose steadily by 3 inches before falling back to its original position three times.  Despite the night being young the bream were already on the prowl with their high backs and rotund bodies snagging momentarily on my mainlines which entered the baited zone.  Pellets soaked in Richworth’s liquid liver provided the base while a  scattering of 10mm tuttis sat like cherries on a cake just tempting a bite.  With little will power the shoal of dustbin lids which had been 30 yards off the area during daylights were now powerless to ignore the pungent scent which emanated from the silty patch between two weed beds.  No doubt if I could have seen into the swim from my lofty tree top perch which had earlier allowed me to obtain a bird’s eye view clouds of mud would have now been streaming from the area as a series of greedy mouths worked in overdrive.

Regardless of the size of specimens I sought to tame I had put my faith in a tiny size 12 specimen plus hook whose heavily forged metal and shape would, I hoped, make up for its diminutive dimensions.  The reason for this choice was so I could offer a small bait on the hair which would match the free offerings giving the bream no reason to suspect my game plan.

My lips had barely touched the coffee when the alarm once again came to life but this time it sung with purpose giving a long constant note.  The indicator was drawn to this music pulling tight against the plastic box which delivered this chorus while I appeared to be dancing an out of time jig frantically trying to pull my boots on!  Then in a rather panicked fashion I rushed towards the noise but managed to temper the adrenalin when it came to striking the rod.  Given the bolt rig I had employed it was already hooked so a thrash of the carbon was not necessary just a steady lift.  Reaching a 1 o’clock position the ruler straight rod now began to yield giving a health arc through the night sky.  I expected, and got, no more than that with line being immediately gained not lost. Bream have little stamina let alone an appetite for a fight and are more than happy to raise the white flag the moment a mistake is made.  The weed bed though between both of us might, I reasoned, have different plans with a copper flank wedged nicely against the vertical wall of vegetation.  So I kept the rod high and speed of retrieval quick to avoid any mishaps.

Soon the pale under belly came into view illuminated by moonlight and even if the bronze scales were still not visible I was left in little doubt that a specimen was fast approaching the landing net.  Then as I flicked on my torch a head highlighted in yellow kissed the spreader block and the unmissable sight of a bright orange tutti hung from the mouth.  Success with a double figured specimen was now guaranteed and it felt to me as if a new season had really dawned.  Spring was certainly in the air reinforced by more slabs to over 12lbs that night and hopefully a prelude for great things to come over the next few months as all fish begin to feed in earnest.