‘When is Catching the Impossible going to be ready?’ is a question I’m frequently asked.  Well the winter of 2008 was, and still is, our goal and while this timetable is proving to be frustrating for some, believe me it is even more so for Hugh Miles and I!  So far over 3 years have been spent gathering the images which make angling so special. Eight hours of footage though is a lot of screen time to fill and with Hugh’s dedication of never accepting mediocrity, days can turn into months and then years.  It is also vital that the project isn’t rushed as perhaps never again will angling have a chance to portray itself on such a level.  Believe me, there are not many world renowned wildlife cameramen willing to work unlimited hours at their own cost and in fact both of us, to a lesser or greater extent, fully accept that we will probably lose money for our troubles.  In a world full of chuck away television we both believe angling deserves another ‘Passion for Angling’ – who knows it may inspire a whole new generation.

Gilding the lily is what Hugh does best so recent months have been spent revisiting the scenes of success to polish sequences still further.  The attention to detail has been amazing with no stone left unturned.  As the film weaves from above to below water a real feeling of anticipation can be felt.  The English summer though has done its best to blight our plans with blue sky seemingly extinct.  A lengthy period of illness for me has also tested us so let’s hope the scenes in Scotland were worth the trouble!  Crawling along the forest floor to feed red squirrels wouldn’t have been attempted if I’d known ticks were on the agenda!

While the need to film new fishing sequences has diminished somewhat we will be hoping for a Fenland zander and the river Wye in the snow this winter.  More pressing though is Des Taylor on the Severn and a mullet for the camera.  With seemingly endless floods preventing our scenes with Des at least the mullet adventure has got underway mixed in with a carp catching trip to Norfolk.

As the boat chugged out from a flotilla of rafts in the tidal Stour my companion and I hoped to tempt our first ever mullet.  With a song and a joke the journey was an enjoyable affair in the hands of the irrepressible Bernard Cribbins, not only the narrator for the series but also a key angler.  Both of us followed the textbook instructions and dutifully trotted lumps of flake under floats.  With a stream of liquidised bread also introduced the simple matter of a bite seemed not far away.

With a disappearing float and strike of the rod I hoped both Bernard and Hugh had noticed my skill.  ‘Be careful of the anchor rope,’ Mr Cribbins offered.   ‘No problem, I know what I’m doing,’ came the reply.  Seconds later a whiz of the pin, a bang of the rod hitting the water and then a crack of the line ensued.  Why do I have a funny feeling that clip won’t end up on the cutting room floor?

Our mullet, I’m afraid to say, would need a rematch – it was time to visit John Wilson.

The best job in the world is what I’m told frequently.  Well 3½ hours in and I’m faced with the delights of the A11 at Thetford, I can think of better options, especially knowing that I would be lucky to get a single hours fishing time in over the next 2 days.  I suppose us actors must suffer for our art! 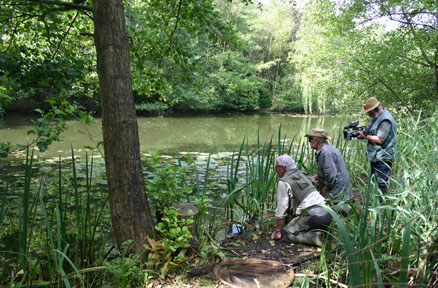 John was full of life and as I pulled up in the driveway was as eager as ever to dispense his enthusiasm for the wonderful lakes he has created.  With Bernard and Hugh in hot pursuit we spent the late afternoon walking the banks and forming a game plan for the following day.  Whose bright idea it was I don’t know but somehow a fly rod and a carp got thrown in to the mix and suddenly a straightforward capture was no longer good enough.

An evening in the local pub and a good nights sleep saw us rendezvousing back at John’s the following morning fighting fit and raring to go.  With bravado we set off feeling success was assured, after all how could two old pros like John and Bernard fail?  I could simply sit back and wait for my scene; a carp on a floating pellet and a fly rod was as good as in the can.

If you have days where everything goes wrong then you should find solace in this tale for as the hands on my watch slowly spun round we lurched from one disaster to another.  Fish melting away into the shadows, missed bites and lost carp followed each other and then repeated themselves.  In desperation a bottom bait was put out and a bite followed, the only problem being that the hook fell out five seconds after making contact.  Had the pair become poor anglers?  Of course not but combine bad luck with a film camera and you do have a recipe for disaster.  Frustration turned in the end to laughter as everything that could go wrong did!  An evening back in the pub was needed to drown our sorrows.

Day 2 and the promised sunshine was replaced with heavy cloud, still it was difficult for the lakes not to radiate beauty as they had been designed to be the perfect venues. 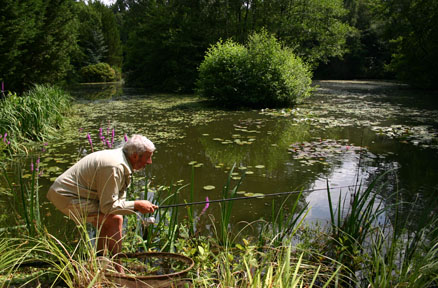 When in the first swim the carp once again did an impression of Houdini we all looked to the sky – failure was not an option but reality was beginning to dawn.  For the umpteenth time John and Bernard crept into position.  With a flick of the wrist Bernard’s pellet hit the surface and a shape rose in the water.  ‘Come on baby,’ he muttered as a pair of lips gulped at the bait.  With an explosion at one end and a spinning spool at the other Bernard uttered the words ‘and they said rock and roll was dead!’  At last Hugh could capture the moment he wanted – 2 grown men whooping with delight!

Another step had been taken along the long road and with a little patience I’m sure we can deliver what’s expected of us. 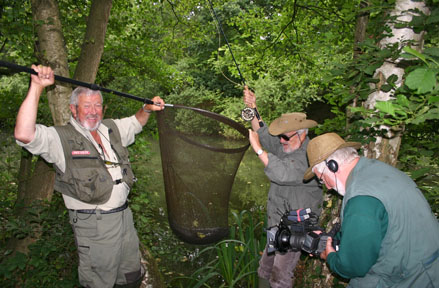