A Day with Peter, the Fishing Tackle Legend

The smile etched across the face of an angler who has seen and done it all should have told its own story, especially as he was cradling a fish in his hands.  Indeed it was a creature of beauty with its scales shimmering in the way Mother of Pearl does but the fish’s proportions certainly could not be described as spectacular, because the punch line here was the word gudgeon.  Who was it that was so pleased to see a ‘gonk’, a species that had not crossed his path for years and now it had was the spark to reminisce about days from a bygone era when our rivers were stuffed with fish.  Well, the man in question was Peter Drennan who you probably expected to only desire a match winning weight or specimen fish but I can honestly say in all the times I have angled with the man I have never seen him so pleased and that reaction spoke volumes to me of his attitude to the sport and was in all probability the reason we were now pleasure fishing the Kennet.  Yes, we hoped for a good roach but to see the tip pull round or float dive under was more than enough especially when the mixed bag grew and so did the trip down memory lane. 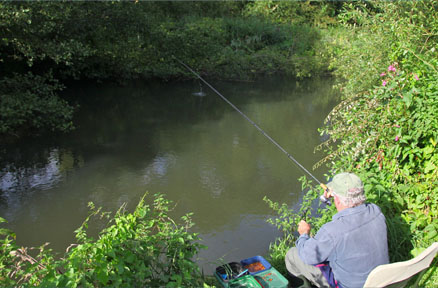 Peter’s first visit to the famous Kennet came as a fishing mad teenager on board the regular coach trips north Oxford Angling Club arranged to fish matches against Reading.  It was a time when flowing water up and down the country was quite literally stuffed with fish.  The weir pools of both the Kennet and Thames saw vivid green silkweed growing on its sills and you needed to do no more than run your hook through it (attaching by hand didn’t work) and then allow the vegetation to trot downstream.  There was a fair chance it wouldn’t make the 5 yard mark before being nailed by a roach.  The 50s also saw maggots as bait arrive in earnest along with feeders helping to transform barbel catches although Peter still clearly remembered using minnow to deadly effect for the species.  I wonder if they would work on the Kennet today?

His quiver tip rattled in annoyance and Peter’s bid to stop the disturbance with a clean strike seemingly met with failure as well as pausing conversation.  On reeling in however the hook had found a home, inside the mouth of the diminutive bleak.  Today it seemed mini species were going to be the catalyst for more than one tale. 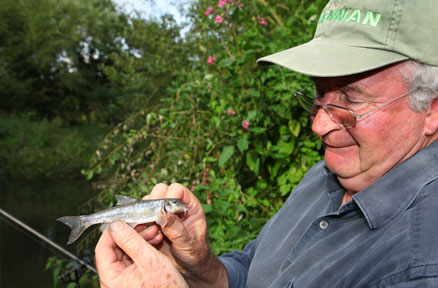 Arriving at a match on the Kennet with the late, great Peter Stone both men drew badly in a walk off style draw, meaning they knew before the tackle was ever loaded on their backs that obtaining a prime pitch wasn’t going to happen.  Close to the car however was a canalised section that everyone had walked past.  Saving on legwork especially as it would be futile the pair set up on this uninspiring section of water and surprisingly began to catch well!  So well in fact that the local cat put in an appearance sitting next to Peter hoping for a meal.  Peter duly obliged and the moggie disappeared.  Twenty minutes later however it was back eager as ever to get its paws on another of Peter’s fish.  Over the duration of the match he gave away 5 of his bleak oblivious to what this meant – but he soon would.  At the weigh in they came first and second in the match and Stoney won by 2ozs!

It had been a number of years since Peter had last fished this river, so what had drawn him back as over the last decade or so it has fallen from grace especially for its silver fish stocks.  At Burghfield however where the water course splits sits the Cemex section and here in the faster part of the river is that all important cormorant proof factor  - quite literally dozens of trees have fallen in to the water and the canopy overhead is dense giving these birds no opportunity to land or take off.  With a chance of a foothold it doesn’t take long for nature to correct itself and quite literally the water teems with all manner of fish, proved by Peter’s constant striking at bites.

The rig itself was very simple combining a cage feeder and a light groundbait stuffed with casters.  The set up was then trapped on the mainline on both sides by float stops creating a ‘dink’ rig.  To further aid this self hooking method a single caster was impaled on a 16 hook.  Following a simple rule of steady feeding a shoal of eager mouths soon formed an orderly cue.  In this line sat the main prize – roach displaying that classic Kennet livery, a bluey hue to each and every scale.  Quality dace also found the cloudy groundbait and caster combo too irresistible but it wasn’t only Peter who coveted these fish.  A strike, a dace on followed by a snapping set of teeth belonging to a pike, which then proceeded to tow Peter’s tackle around for the next couple of minutes.  It disturbed the swim but such was the quantity of fish present that the very next cast produced a bite. 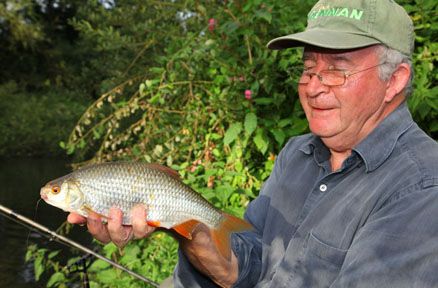 For a man brought up on flowing water which helped develop a passion and quite probably the country’s greatest ever fishing brand returning to his roots was a chance to go back in time and remember the good old times and hope that the river will one day thrive again.  The last words have to be Peter’s when holding a pound roach – ‘what a lovely day’.

If you enjoyed reading this don’t forget that you can read my adventures every week in the Angling Times.