Ancient stone forts and lookouts sit upon cliffs that soar into the sky holding back the white-capped waves and swell of the Atlantic. Here, where land and water, collide, the northwest coast of Ireland is testimony to the forces of nature, unforgiving, mesmerising and beautiful in equal measures. Cut beneath the surface and these descriptive words only gain in their poignancy for here, in August onwards, one of the world’s greatest migrations reaches both destination and crescendo. First the sea fills with scales as saury mass on the shoreline, followed by herrings until the water is turned from blue to silver. Drawn by food so too are the predators who follow in hot pursuit. Dolphins, minke whales and seals know it’s a time to feast, as do the gannets and kittiwakes on the wing watching from above and waiting for the orgy of scales and fins below to come within diving range. All supreme hunters in their own right but still they wait for the attack to begin with the arrival of some of the biggest fish in the Atlantic.

Like so many places in the British Isles Ireland proves that some of the world’s greatest natural wonders are not reserved for far flung places or TV and all you need is for someone to turn the key and reveal a marvel so incredible that you breath will be taken away. Adrian Molloy is one of those rare men and while his quiet persona would fool you to think otherwise his passion for the sea knows no bounds. Addicted is maybe another word to describe this mild mannered charter skipper and little wonder as he knows when the leviathans of the fish world arrive and more than anyone alive how to tempt them into striking. On the west coast of Ireland he is a legend and was the reason I flew to Dublin and met friend Paddy Keogh before driving across the country to Kilcar in County Donegal.

The boat Evie Rose left the sanctuary of the bay at 7.30am the following day skippered by Adrian and assisted by deckhand Connor McKiverigan. Immediately Paddy and I felt at ease in their company although I was somewhat puzzled by Adrian’s prediction for sea conditions from inside the cliffs protection but all became apparent as we turned the corner to face the power of the Atlantic. 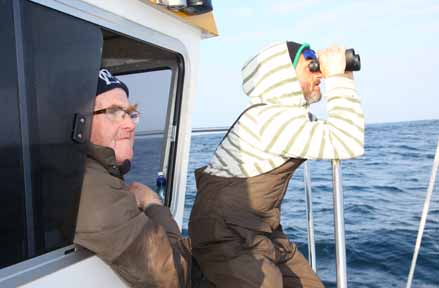 Here man is nothing more than a guest where the invitation to visit doesn’t come on a daily basis. Our skipper was the only reason we had been let in and would be the reason if we caught anything. The only skill on my part in this whole adventure was picking the right man to guide me!

Despite the swell the boat functioned seamlessly and the hunt began in earnest. Once prepared the rods fished for themselves although I add knowing how to rig them correctly had taken years of hard graft to perfect. So save watching for weed on the lines both Adrian and Connor’s focus turned to the horizon and in particular the birds. We were waiting for an attack and a whale followed by dolphins and seals broke the surface looking for the same thing – bait fish being driven to the surface during slack water. Our eyes on the ocean belonged to the gannets that circled in the sky looking for a flash of silver but the saury and herring wouldn’t blow their cover willingly. Unfortunately for them as we trolled above they were being herded into a living ball that spun and glittered. The soup of plankton that had drawn them here was no longer of interest with so much danger all around. The hunt was on and for a while the bait balls sheer scale confused the predators but the huge tuna below eventually pushed it to the sun and their doomed destiny.

The first attack was tried to break this single cohesive unit and splinter the shoal. With each pass the tuna swiped at the wall sending scales tumbling in to the abyss, but worse was to come as the first wave of gannets hit like missiles while kittiwakes danced above. Joining the melee a minke opened its cavernous mouth and took a chunk out of the sphere and now there was no escape. The sea’s surface boiled with both predators and prey and Adrian made his move while the air was thick with the smell of tuna and an oil slick drifted from the attack. This was no lucky arrival or coincidence and was as skilful as the dolphins that were now on the scene too, spotted a mile away by the eagle eyes of the skipper when the chaos was no more than a glint on the horizon. Would we make it before the last herring was devoured? Because once the demise of the herring and saury was total our quarry would simply vanish beneath the waves. 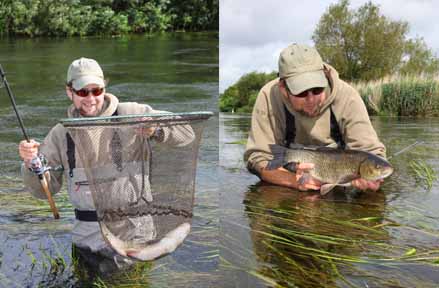 Careful only to pull the lures and not the boat through the chaos we made it as the last herring was hit. The pyramid of life was collapsing in front of our very eyes until quite suddenly we became connected again albeit it a tenuous one via the line snapping taut, the rod buckling in its holder, conducted with the sound of a drag yielding in a cacophony of clicks. ‘Fish on!’ was the shout from an excited Connor while I looked on agog. I had come to fish with one of the world’s best skippers and was happy with that – an albacore was my hope and would have been wonderful but this creature was way too powerful as the reel spewed its contents into the Atlantic. ‘Blue fin’, Adrian said calmly and with authority. 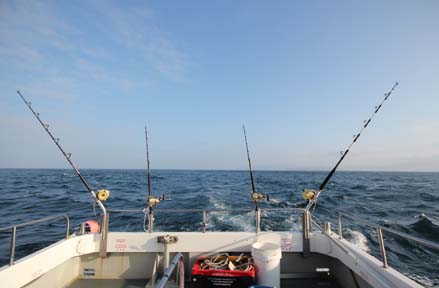 For a minute or more I could do nothing as the fish charged out to sea and this was against drag that I could barely budge by hand. The tunny however is built for speed with retractable fins allowing it to fly like a bullet and it wouldn’t be me who would decide when it stopped. Even when it did eventually sallow down leaving the multiplier’s drum all but bare such was its size and power I needed to physically pull line with my gloved left hand before spinning the reel handle. A task that drained energy but my opponent had only just begun to torture me turning and heading directly for our vessel. Reeling in as fast as you can for 30 second bouts saps muscle strength rapidly done once, but repeated time and time again the lactic acid In my arm sent it numb and weak. There was however no option to stop the hook pulling out and I felt my inner core heating up - never had I sensed so much power on the end of my line from the beginning to the end of the battle during which I lost track of the minutes which passed. At last the creature swam in circles under the boat but this was no time to rest and Adrian told me to push harder to try and break the tuna’s will. Pulling as best I could it still seemed like an eternity before the fish’s flank was spotted and I gained the final yards inch by inch. 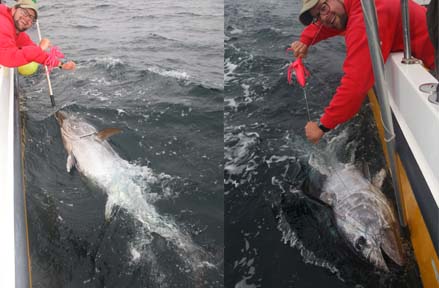 I was exhausted but my suffering was to be rewarded by the incredible sight of a fish measuring over 90 inches long and weighing more than 450lbs. The statistics made it a giant blue fin tuna but numbers weren’t what left me amazed. A dusky back merged into metallic blue before a head and flank seemingly made from polished titanium revealed itself against the boat – this was a fish of fantastic proportions and beauty, which is difficult to describe but imagine a mackerel the size of a single bed! Then my short time with this amazing fish was over as she was returned to the ocean.

I was so grateful to Paddy for the invitation and Adrian, along with Connor, for their expertise. Smash the piggy bank, sell the car, do whatever you can to visit Adrian Molloy who will show you a place that will change the way you view the world!