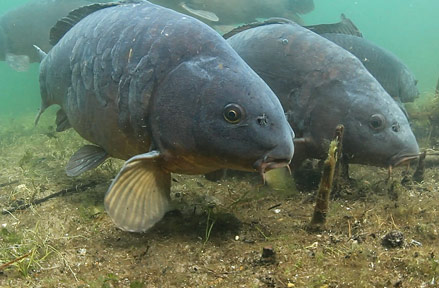 We all have our favourite items of tackle but nothing can be more important than the hook at the end of the other paraphernalia.  A lack of sharpness will mean that if you rely on a bolt rig you never receive a bite in the first place and then once this job has been done successfully its strength must match that of the carp’s or failure is to be expected soon after. But in the modern era the angler is spoilt for choice with companies such as E.S.P., Korda and Nash supplying tailor made products to suit every style of rig.  Maybe then you would expect me to select the latest pattern but with a motto of ‘if it ain’t broke, don’t try to fix it’ I put my faith in a retro model that I would use if I had to stake my life on landing a fish!  The Drennan continental boilie hook has stood the test of time and with a few minor tweaks is what I use and will continue to put my faith in for most of my carp angling.  Firstly I remove the offset with a pair of pliers ensuring the eye and point is parallel.  This creates a straight pull and helps the mechanics of the modern carp rigs.  Secondly I test the point’s sharpness on a thumbnail where it must dig in and not slip.  Thirdly, if required I use a jeweller’s sharpening stone to touch up the point and finally I inspect the hook via a magnifying glass to ensure perfection.  Then, and only then will I deem it acceptable to cast out.

So why do I seem to have a hook obsession this week?  Well that may well have something to do with the style of fishing I had embarked on – snag with a capital S!

My good friend Spike and I had decided to try our hand at the carp, which inhabited a beautiful 15-acre gravel pit, but a spanner had been thrown in the works with a bitter east wind.  This had seen the fish retreat from the main body of water into the calm margins, which were littered with timber.  To reach this area meant an extreme form of carp fishing at over 150 yards relying on a boat and electric motor to deliver the rig and bait.  Then I could lower my offering down on the polished gravel bottom at the door of a sub surface jungle with a certainty that a bite would follow.  But to be victorious in any battle would call for complete faith in the tackle.

The rod and reel needed to be locked up with the clutch wound down tight and held in place by a set of snag bars.  Braid instead of mono needed to supply much of the strength because it wouldn’t yield an inch with stretch and every bit lost on the take would prove crucial.  With no option but to simply walk backwards when the alarm sounded the brunt of any carp’s wrath would be firmly focussed though on my size 4 hook with that relatively thin gauge of metal the dividing line between success and failure.  Given a few gorgeous heavily plated mirrors ending up on the bank my faith seemed to have been wisely placed but a true tug of war with a big fish had yet to come.

Brutal would have been an understatement for what was to unfold as the alarm let out a single note as a warning.  Unable to give braid the rod hooped round testing the carbon beyond a safe test curve.  For my part I left tranquillity and rushed frantically towards the commotion, grasping for the duplon handle.  Grip secured I walked backwards hooping the rod even further over while praying to every god known to man!  The force was incredible and all of it terminated at the U shaped piece of metal.  The carp, for it’s part, wanted nothing better than a failure and surged again at the sanctuary of branches. still its anger was tempered which forced the mirror to momentarily hesitate – a costly mistake.  The tackle could now force a change in its line of sight and with it the carp’s saviour had gone.  The gravity of the situation soon dawned on both of us and almost immediately all its will power wilted away.

I was left to simply reel it in with little more resilience and allow the net to secure 34½lbs of carp for me.  It was only when I searched for the hook that I realised how close to disaster I had been because there in its mouth was a slightly gaped continental but still it had refused to buckle.  I was left in no doubt that my old favourite had once again saved the day.